I’m not going to lie to you, loyal reader. One of the great things about doing this is the steady stream of new music that comes my way. This one arrived in my PO box and my first impression of this San Diego band was the sticker inside the envelope declaring this “American fiddle rock.” That is a perfect description of the sound of Lexington Field. The second thing that caught my attention is that Incognito Guest List writer Matt Maulding plays the accordion on this album.

Now when you think of a fiddle in a rock band, what sort of music comes to mind? Probably Celtic rock. There is some heavy Celtic influence in this band, but while a lot of Celtic rock bands go heavier on the Celtic, this one goes heavier on the rock. First off, this is a rock n roll fiddle if I’ve ever heard one. Secondly, these guitarists are not afraid to show off their chops. Just listen to the song “Fireworks” and “The Chemical Worker’s Song” and see if you disagree. Also, there is some real anger in the vocals. All that being said, Lexington Field also has some amazing harmonies in its tunes. “Daniel Plainview Has a Drinking Problem” is a great example of the harmonies you’ll hear from this band.

One thing this band has in common with a lot of Celtic rock bands is that it is not afraid to put a heavy message into its songs. Take “The Chemical Worker’s Song” for instance. In this song, Beau Gray sings about how every day as a chemical worker brings you two days closer to death. “Cursing The Man” is another good example, but more than that it is also easily relatable. After all, most of us probably curse The Man every day.

No Man’s War is an album filled with emotional rocking songs. Fourteen of them, so you certainly won’t feel cheated. If you like Celtic rock, I have no doubt that you will like this band also. No Man’s War is available now. 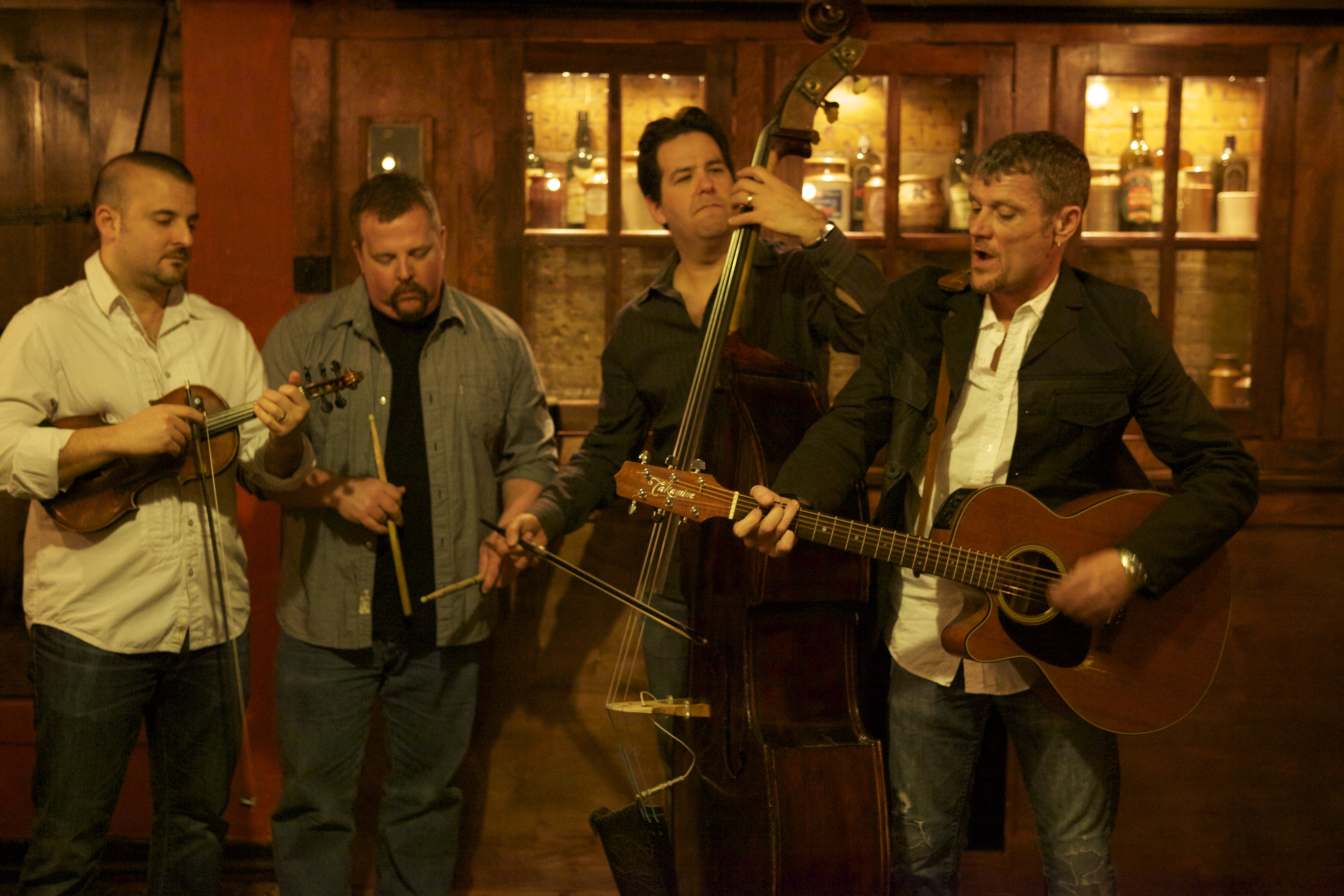 “We’ll do our best to continue to make music.”

This interview was originally scheduled for our St. Patrick’s Day issue. Due to the death of singer Ray Kelly, the interview was postponed. Now we are taking a brief hiatus from publishing new issues, and I frankly didn’t want to wait until later this year to publish it because it’s such a good interview. Without any further ado, I give you the interview with Brian Tracey by our our very own Carin Merritt (send or address all kudos to her for this fine interview).

Describe The Mickey Finns in a nutshell.

In a nutshell…well, I guess right now we’re a band that’s missing our friend, singer, and guitarist. We lost Ray Kelly just a couple of months ago and the pain has not really begun to heal yet. It’s gonna take a long time, but we’re happy with the great music and great memories that he left to us. Now before Ray passed away, we were a band that was looking forward to the future. We’ve had a bunch of great reviews for our newest album Prayers and Idle Chatter and were itching to get out on the road to play our songs throughout the country. And while we’re not ready just yet, we still plan on doing that.

What does it mean to you when someone calls you “one of the best Celtic rock bands in the world”?

It’s really a great honor. We grew up listening to what we considered the best Irish music – The Dubliners, The Pogues, The Clancy Brothers & Tommy Makem, The Wolfe Tones. The list could go on for ages. We were lucky to have met and played with most of them at some point and now we’re happy that we’ve had a part in shaping some of the sound of the new Celtic rock. We’re always striving to be the best we can be and hopefully people will like what we’re doing. So far, that’s been the case and we’ve been blessed with that honor.

Well, the goals for 2013 have changed since the beginning of the year. I guess right now are goals are to continue forward with the band and with the music and to honor Ray Kelly. It’s been tough to bounce back from our loss, but we will do our best to continue to make music. It’s just what we do. We’re planning on having a benefit for Ray’s children soon, so we’re gonna be be concentrating on that. And we’ll have to eventually look for a new singer, which will be very tough. But like I said, making music is what we do best and we need to continue to do it…as hard as it may be sometimes.

Where does the inspiration for your sound and lyrics come from?

Our influences are wide and varied. We have a fair bit of traditional music on our records and in our live shows and that mostly comes from our fiddler, Matt Mancuso, one of the absolute BEST traditional fiddlers on the scene. The rest of the sound is all of us thrown together. We all love Irish ballads and old school outlaw country. I think our sound is a bit of The Pogues, Steve Earle, Kila, Solas, The Dubliners, and Hayes Carll all thrown together.
The lyrics…well, I guess it differs from song to song. It’s a bit of our experiences on the road, in life, and a bit of theft as well! But only a small bit…and only the good parts. And whiskey…a lot of inspiration comes from whiskey!

You are allowed to perform only at one bar in New York for the rest of your career, where will it be and why?

It’s gotta be Paddy Reilly’s. It’s been our home base for years…from our early days in The Prodigals through our whole career as The Mickey Finns. It’s the best place to hear live Irish music and has been for years. Steve Duggan has been a tireless promoter of Irish music and it’s still the best place to play. Plus they serve a mean pint of Guinness!

What is everyone’s drink of choice:

five minutes before going on stage? Shot of whiskey.
to cure a hangover? bloody Mary
to celebrate? Shots and pints all across the board!
to make that cross-eyed, toothless girl that’s been eyeing you all night appear pretty enough to take home? whiskey…and lots of it!
Can you tell we love our whiskey? Half our songs are about it as well!

Tell us one of your favorite stories about Ray.

I’d say this would be the hardest question. Ray has always been a talented carpenter when not making music. Some years back he made a chest for our speaker cables and mics. It was dubbed “the box of death” because it weighed a ton and had sharp little corners that would always cut you. We were playing with The Prodigals at the time and Harrison Ford, yes, THE Harrison Ford, was at our show. And he gave Ray a hand carrying the box of death into the pub. And the two of them had a nice chat about being carpenters (Mr. Ford used to be a carpenter, too). It is such a Ray thing…he could literally talk to anyone about anything. He was the the best frontman in the world, but had zero frontman ego. And it wouldn’t have mattered if it was Harrison Ford or some guy off the street…he treated everyone with respect. But he was pretty chuffed to be hanging out with Harrison Ford! And there are a TON of stories like that.

What is your favorite quote that represents The Mickey Finns?

A quote about us? I have no idea! But a quote that I like…”I have taken more good from alcohol than alcohol has taken from me” from Winston Churchill. Not that we condone drinking…

If you weren’t making music, what would you be doing?

Me personally? I’ve had so many different jobs over the years, but never enjoyed a single one besides being a musician. I did study to be a teacher, so maybe that. Or maybe I’d just be an itinerant. That always seemed like a pretty good way to go about your day! For now, I’m gonna stick with the music. 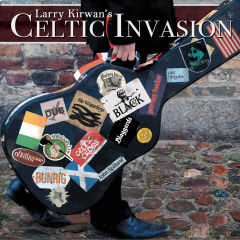 Sometimes things just kind of fall into place. Like when you receive a notice about a Celtic compilation just before St. Patrick’s Day. (Speaking of which, have you seen our St. Patrick’s Day issue yet? It is chock full of good stuff for your St. Paddy’s celebration: an interview with The Mahones, reviews of Irish beers, a cocktail with Irish whiskey, and a list of Irish whiskeys to try in that cocktail.) This concludes the shameless self-promotion portion of the post.

Larry Kirwan’s Celtic Invasion is a great album to add to your St. Paddy’s playlist although I should note for the record that you’re out of luck if you’re expecting a compilation filled with Celtic rock and punk. Don’t get me wrong. There are some fine Celtic rock bands and songs on this album: including Barleyjuice, Runrig, and Black 47. Oh, and if you’re into those Celtic songs that you can hear on any jukebox, check out “The Irish Rover” by Blaggards. This is as punk rock (yes, even more so than the version with The Pogues and Dubliners) a version as I have heard. If this one doesn’t get your foot stomping, I’m not sure what will.

This album also has a song with more of a folk rock feel (“You’re So Beautiful”) and a song partially in Gaelic that sounds more like progressive rock than traditional Celtic music.

If you’re looking for some music for your St. Paddy’s Day bash, this will be a welcome addition.

Few things say taking it easy like drinking in the day. Sure, some people will frown on it. Most likely they are jealous because they are working when they wish they could be enjoying a nice beverage. The Tossers certainly find the merit in drinking at an hour when square types are working. And let’s face it: who does drinking songs better than Irish bands?
In this song, the narrator meets a girl who says she will have a drink with him (yes, even though it is the middle of the day) and he tells her she’ll have to pay (Genius!). They go off and find a place to enjoy their daytime beverages. It’s simple, really. The best line about taking ‘er easy is “the best spent youth is the one you throw away.” Enjoy this song about one of the most leisurely activities there is and until next time, take ‘er easy. I know that you will

Yesterday was a good day for new music. When I opened up my PO Box, I found the latest LP from Greenland Whalefishers. There’s something very cool about getting music from Norway in my box, especially when it’s Celtic rock.