Generally ‘Billy Monday is reserved for rockabilly and psychobilly bands, but today I’m doing a little something different. As I mentioned last week, sometimes I ask bands where they would file their music in a record store. More than that, I give them the latitude to create their own file-under category. Well, The Steady Swagger has created its own file-under category: Whiskeybilly.

What is whiskeybilly? Well, the recipe might go something like this: Take one part Tom Waits, one part Sleepy LaBeef, and one part United Steel Workers of Montreal, and one part gypsy punk. Add a cask of rum, and a healthy dose of pirate rock. Now let me explain at least some of the ingredients in this musical cocktail. The vocals frequently sound like the theatrical growl of Tom Waits. There is some definite classic rockabilly sound (as well as some vocals like Sleepy LaBeef) in “One More Shot.” The backing vocals by drummer Brigitte Desjardins sometimes remind me of Felicity Hamer of United Steel Workers of Montreal. As for the rum…something has to fuel this band and its energetic recordings. As for the pirate rock, what can I say? My two boys have become big fans of Jake and the Neverland Pirates.

While that description is pretty accurate, it still doesn’t do this band complete justice. Do yourself a favor. Pour yourself a big shot of rum (since you’re listening to this band, don’t mix it with anything this time), crank up the volume, and give The Steady Swagger a listen. It will get you rocking, and it just might get you shopping for an eyepatch.

The Monster Within (digital) will be available on 16 April.

The upcoming album The Monster Within (Sailor’s Grave Records, 2013) from The Brains that made its way into my inbox and piqued my interest. How could I refuse, loyal reader, when the band is described to me this way:

a three-piece horror punk/psychobilly punk band from Canada who fuse elements of rockabilly and punk rock with outlandish style and fast-paced rhythm.  If you’re looking for something completely different than the norm, check these guys out.

I probably don’t have to catalog what caught my attention, but I will: outlandish style, fast-paced rhythm, and different from the norm. Those are all qualities that are almost certain to draw me in. I will say this: the bit about the fast-paced rhythms is not hyperbole. Pick any song at random from this band and just try to keep up with the rhythm section. If you want a specific example, check out the song “Cucaracha in Leather.” This song sounds like the guys had a cab waiting when they were recording this one in the studio. That seems to be the approach the band took to the entire album, considering the longest song (“Lies”) is 2:55.

If you’re looking for the rockabilly elements mentioned in the promo materials, check out “Misery.” I won’t say the guitar takes a backseat in any of the songs, but it certainly comes to the forefront in this song with a sound that may be a little too fuzzy to be considered classic rockabilly, but to quote Kinky Friedman, “It’s close enough for country dancin’.”

This is great psychobilly stuff. Granted, there are some dark themes, but these 14 songs are incredibly well done. If you like the doghouse bass at all, you’ll want to add this album to your collection because Colin the Dead is a wizard. The digital version of The Monster Within will be available on 16 April. 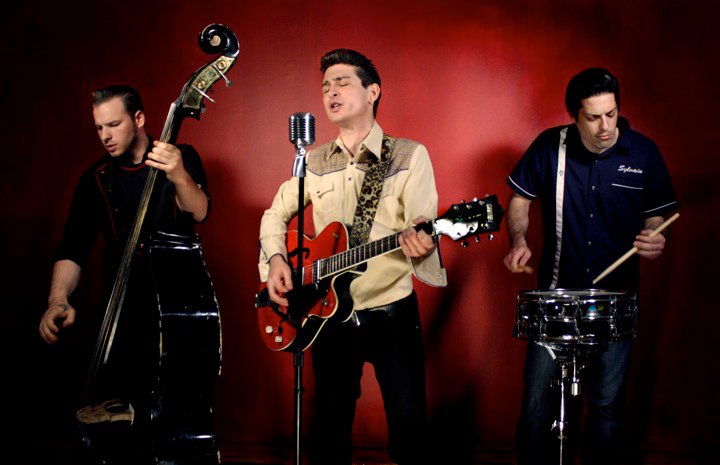 Unfortunately the band only has three songs on its website. “Only Man” at first brought Brian Setzer to mind. However, the more I listened to it, the more I realized that this is a lot closer to Lee Rocker’s Racin’ the Devil album than Brian Setzer. One thing is for sure at first listen with this band. These guys can play. Don’t just take my word for it. See for yourself.