Sometimes there’s a song – and I don’t mean a #1 hit – but sometimes there’s a song and it’s the song for it’s time and its time and place. You see, earlier this week I was browsing YouTube for Robert Earl Keen songs, and I came across this song. Now, you might say it’s an easygoing song -quite possibly the most easygoing song you’ll hear today, but if you ask me the song fits right in there on a Take ‘Er Easy Thursday.

I suppose some people might be offended because they think the message is vulgar. But you know, sometimes the message delivered by The Dude and in this a-here song I’m about to unfold is the best one. You know, when bad things seem to pile up, but in the grand scheme of things don’t mean anything, sometimes you just have to say…look at me. I’m ramblin’. I done innerduced it enough. Anyway, I think you’ll agree that Robert Earl Keen does it better than me. That about wraps ‘er up. I’ll catch ya later on down the trail. Until next time, take ‘er easy. I know that you will.

Yes, I know. It’s been a while since my last Take ‘Er Easy Thursday post. Let’s not dwell on the past. Instead, let’s focus on this moment, which is another celebration of the ethos of The Dude. Now, I should say that this is a little different than some of the other songs we’ve featured for Take ‘er Easy Thursday. However, the title of this song is not only something The Dude says in the movie, but also something that The Big Lebowski recommended that The Dude tattoo on his forehead.

Certainly, The Dude is not the first guy to utter the words. But let’s face it. There is a lot of power in those two little words. Days n Daze realizes the power and the freedom in those words. Just check out the lyrics of the chorus.

Fuck it! Why not go for broke?

Trade in all your chips and learn how to be free.

Why abstain? Why jump in line?

We’re all living on borrowed time.

If that’s not Dudelike, I really don’t have any idea what is. The Dude certainly traded in his chips and learned how to be free to drive around, have the occasional acid flashback. Plus, we all know that The Dude doesn’t abstain: from drinking, recreational drug use, coitus, or telling off rich guys in their own homes. Think about it. When The Dude says “Fuck it!” it’s the ultimate battle cry of freedom. At that point, all The Big Lebowski can do is lecture him as The Dude walks out of the room. That right there is the power of those two little words. Well, I guess that wraps ‘er up. I’ll catch you later on down the trail. Until next time, you take ‘er easy. I know you will.

Greetings, loyal reader. Your calendar might tell you that today is Thursday, but here at Incognito HQ, we like to call it Dudesday. It’s our weekly celebration of the ethos of The Dude. Now, this edition takes a little different track than our usual Take ‘Er Easy Thursday tunes. Normally, I present a song that is a celebration of laziness and shirking responsibility. This one does too, to a point.

In this song, Christian D (@ThatChristianD) sings about how that pesky day job gets in the way of the things you need to do like getting drunk and hanging out with someone whose company you enjoy (as opposed to your coworkers). Brothers and sisters, friends of the revolution, can I get an Amen? Now, we all know that The Dude has no job to get in the way of his good times. And that’s why we find him so durned innerestin’. While the rest of us are slaving away and complaining about our jobs, The Dude does only what he wants to do. And we’d take comfort in that…if only we could pull it off.

Dudeist lyric: “I want to grab that whiskey jug and spend some time alone.” Granted, The Dude would reach for a fresh white Russian, but you get the idea.

“Life Gets in the Way” is on Cut Loose and Live, available now on Bandcamp for the low price of $10.

Well, that about wraps ‘er up. I’ll see ya later on down the trail. Until next time, you take ‘er easy. I know that you will. 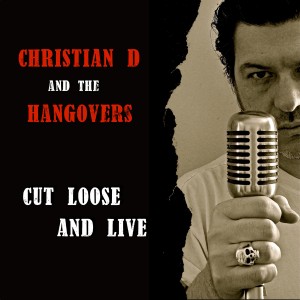 Cut Loose and Live is available now on Bandcamp